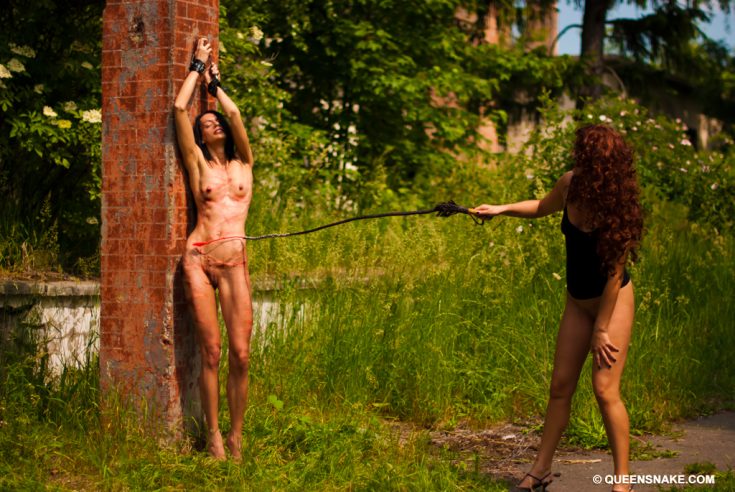 That was the first time for me being whipped by a girl and since the girl – Tanita – has never done any kind of whipping before, I was a bit afraid how she would be able to use the long bullwhips on me which were new tools not just for her but for me as well.

We found an abandoned military base that has already been taken back by the nature, it was a perfect place to test the new bullwhips.

My hands were tied up above my head to a column, first showing my back to my wannabe mistress and pushing my butts out to offer for her. She started to whip me with the smaller bullwhip and I had to count the strokes. The rule was the usual: as I pronounced the number, I got the next lash. My master did not predetermine any number of the strokes I had to bear, she simply flogged me until my master decided to stop.

The first lashes were not too professional and slightly painful but the more she whipped the more pain I got, she were getting better and better in using the bullwhip and she really enjoyed that testing game and practicing on me. Finally I counted 55 lashes but actually I got 55+2, it seems that I wasn’t too good in counting.

Then I had to turn around and now my tits, my belly and my pussy were the targets. That was much more painful already in the beginning. Especially when she tried the bigger bullwhip. OMG, it was way too painful, I could only bear 5 strokes so she returned to the smaller one. Since I am very slim and I have almost zero fat tissues, the strokes are much more painful for me than a girl with a normal body type but I think I don’t have to explain it to the experienced BDSM fans. When she started to flog me with the smaller bullwhip I wasn’t sure that I would be able to tolerate as many lashes as I could bear on my buttocks but finally I did it: 5 lashes with the big bullwhip and 51+1 lashes with the small bullwhip.

She was fucking good in the aiming, she hit the middle of my navel and my nipples with engineering accuracy, a pro mistress wouldn’t have done it better and I was just squirming in pain and I hardly could count. The last stroke was the killer for my right nipple, I wasn’t able to hold back my scream. She hit exactly the same point of my nipple two times and after the second lash the pain was so intense that I thought my poor nipple had split off. Of course it hadn’t. There was a deep rip right in the middle and blood but nothing serious :)

In the end I said congrats on Tanita’s whipping skills and I was proud of the red welts on my body. After we drove Tanita home, we went for a trip to a beautiful castle but this is an other story…

The marks on my body were visible for more than 3 weeks, I looked like a tiger, LOL.