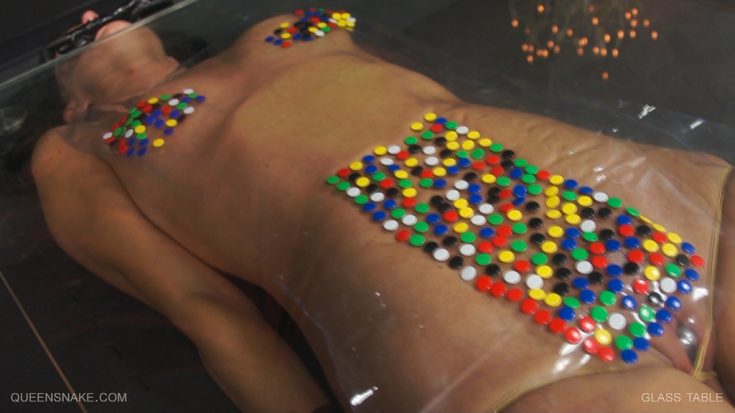 The idea of having or being a human furniture has been always one of my favorites and involving some pain into the play made it even more exciting.

We shoot our videos in our small living room and we need to rearrange the room all the time when we shoot. Having enough place is always a problem so minimizing our living room furniture is a never-ending project for us. That is why I decided the other day to give one of our glass tables away.

Before doing that I realized that the top of the glass table would be a perfect accessory for a “last” torture (it was already used several times in our movies). It is heavy (23 kg), transparent and its size is ideal for human furniture play. To add some more challenges and a big dose of pain of course, placing thumbtacks on the human holder seemed to be a good idea. At least Master loved it when I told him about.  I cannot say the same about my best girlfriend, Tanita who was not as enthusiastic as him when I told her that I want her to be my living table. She hates the thumbtacks. When I was trampling on her with my “vampire” shoes (“Spikes” movie) she hated it, she was completely freaked out of the pain and she knew that it would be something similar. But I told her that she is my only capable candidate for realizing my idea, since my body type is too skinny and the other girls are not strong enough either.

When she arrived to the shooting I came out an other idea to add even more pain to this movie so I made a kind of spiky cover on her breasts and belly which ensured that every thumbtacks were pushed deep into her skin. My master just happily approved my idea and Tanita just became even more scared.

First I thought it would be an easy shooting but of course it wasn’t. Tanita was able to hold the heavy tabletop for a rather long time in the beginning but when I put my evil spiky “haute couture creation” on her, she screamed her safe word in a minute and we had to stop.  She tried it again and again and the same happened all the time. She was about to give up but she is not that kind of girl, she is tough and don’t like to give up anything. So after some rest she tried it again. But this time we gave her some advices: I told her that she had to bear 2 minutes and then it would be easier (it is strange but the human brain can get used to that pain after a time) and Master suggested her to count down, he thought it could help her bear the pain.

This time we did not have to stop for a rather long time and I could make her predicament even harder by trampling on the table aka on her with my full weight (57 kg). Needless to say that she was completely freaked out in the end but she did it. She told us after the shooting that she did feel some ease from pain after a time as I told her and she also kept my master’s advice and tried to count in mind and it helped her a lot.

She suffered so much that she could not stop sobbing even after the shooting and during having a shower. I thought she would not come to us to shoot again but she told us that she loves us and now it was extremely hard and anyway she likes crying and sobbing, she feels better after that.  I realized recently that most of the girls are coming to us to cry lol. Even some of them deny it – like Tanita – they are real masochists.

After Tanita went home I asked my master to put the glass table on me and I admit that just having the heavy glass on me was way too hard for me, actually I hardly could breath under its weight but it was only 23 kg not 80 kg (glass tabletop+my weight). So all my respect to Tanita that she could carry out my crazy idea. Next time she had better loose weight to avoid being the subject of my extreme ideas lol.

And finally some information about the sensation. Thumbtacks – especially if there are many of them at the same time – pushed hardly into the skin can cause almost unbearable pain because they are too blunt to pierce the tissues (except when I am walking on them) but sharp enough to stimulate the pain receptors in the skin. If you ever pierced a needle through your skin you know that the most painful parts are when the needle is entering and coming out of the skin. Thumbtacks in the skin feel like many needles are just going into the skin pressing the tissues but never going through so it can be much more painful than piercing needles and there are no wounds or any red body fluid, just tiny little red holes in the skin which disappear in a few hours so actually there is no healing time and no tissue damage.