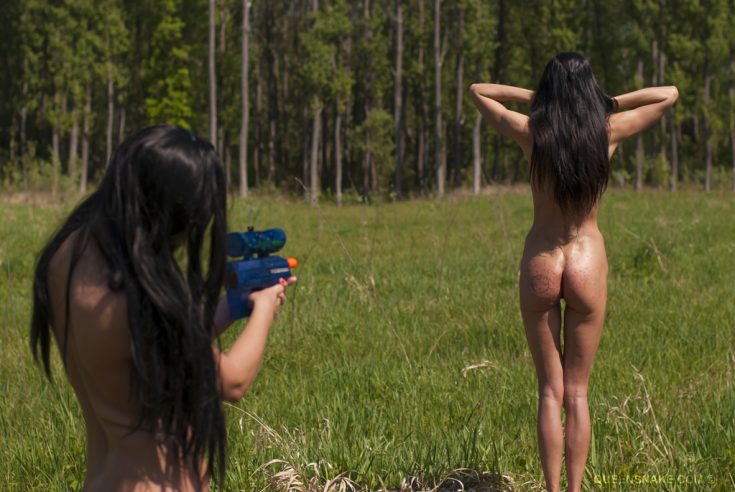 When I first tried a real shooting device (I cannot use that specific word but you know what I mean) to aim a tiny box, I enjoyed it so much that I decided to try the less dangerous shooting games like paintball and airsoft on a living target.

Since I never do anything to my slaves without testing it on myself, I got a BB launcher, several boxes of ammo and we went to the woods with my charming huntress, Tanita for shooting. Needless to say that she was more than happy to test the new device on me. Actually she loved our game so much that right after knocking me out, she wanted to try being on the other side too. So there will be a second BB session featuring Tanita as a prey (that movie will be online later).

Being shot by BB is a bit similar to being whipped but I had many red spots instead of stripes. It is a stinging and rather annoying sensation, it feels like a kind of mix of electro and whipping pain. Of course the pain intensity depends on the slave’s body type: the more fat tissues she has, the less pain she gets. Since my body is almost rock hard, you can imagine how powerful hits I got during that session.

We shot this movie more than 3 weeks ago and I still have marks on my butts :) As I expected, Tanita could stand the shots much better and longer than me and the spots/marks on her body have gone much sooner.

A few words about the pellets. We realized that the red marker bullets’ impact velocity was slower than the standard yellow ones so they are a bit less painful for the slave. Next time we won’t use them, although it is interesting and nice how they paint the body but they stick in the barrel (especially when it is warm) so it is much troublesome to shoot them out.

That was one of our hardest outdoor shooting. We had to bear the hot sun while being dehydrated (we did not take enough water with us), on the other hand we were close to pass out all the time because of the hyperventilation caused by the painful hits.
And to top it all, when we got home and Master started to download the movies, a memory card error happened and it seemed that everything we shot lost in a sec. Eh that was rather annoying but we tried to see the bright side and didn’t give up to get back the raw movie files. Finally after being up all night I found and bought a software that was able to recover the stuff we shot more or less followed by Master’s “hexa editing” the files.
So I can say that we really, really worked hard for these movies lol.