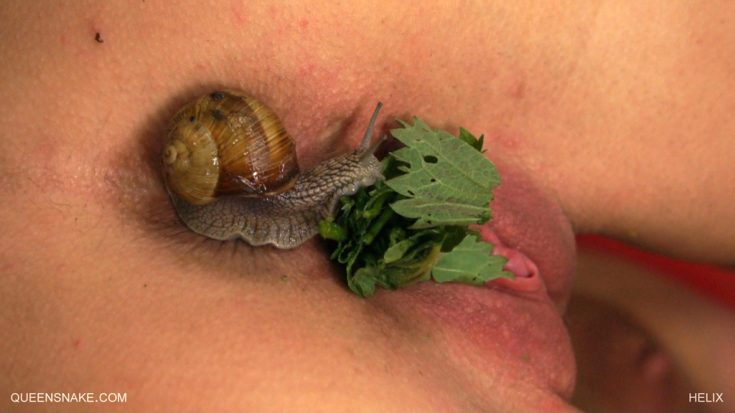 Tanita started to be interested in being humiliated by small creatures crawling on her body. We found that she is a good object for those games because she is grossed out of insects and worms and in this case snails.

The idea of this movie came up when we were on a trip with Master and found a place full of stinging nettles and snails. Since the snails probably like eating nettle leaves, we decided to mix the pain with some humiliation and disgust for her.

Our plan was making an outdoor video but unfortunately we had no luck with that. As we arrived to the place that we spotted the day before, we found a team of  farming workers chatting and drinking bear very close to the nettle field where we wanted to shoot the video. We hoped that they would leave but they didn’t even after waiting for 2 hours. Hehe that is why the outdoor shootings are so difficult, there can always be unexpected events.  Anyway, we just laughed at how unlucky we were, it was so absurd that those workers were settled down right next to us in the middle of nowhere, probably they wanted to hide from people either lol.

Finally we collected some nettles and snails and drove home sadly to make the movie in our living room.

Most of our girls has terms and they don’t do anything that we would like them to do.  Tanita’s main terms – no marks on her body, no big pain (she gets it anyway :D ), no nettles on her full body just on her pussy and nipples – are not easy to comply with but we are trying. But I am not complaining, actually she allowed me to torture her most sensitive body parts :).

It was satisfying to see her squirming and writhing in pain. Her swollen and red nipples and pussy were ideal places for the slimy crawlers, they could really feel like home among the many nettle leaves. Tanita, the green nettles and the disgusting but still beautiful snails were a sight for sore eyes. The funniest moment was when a hungry snail started to nibble at the nettles from Tanita’s stuffed pussy :)

Needless to say that the snails had no harm during the session and they were released in a forest. All of them. Not even a scratch. Did you know that snails can live for 15-25 years? Just think about that when you accidentally step on one next time. That awful cracking sound…

And now the bad news. I had to remove this movie from my site because my payment service provider found that this movie and all my insect movies are against  their rules. Unfortunately I was not aware of that before :(.

It’s ironic that we just shot a new movie with Tanita and ants on the same day when I got the warning from my IPSP  and now I cannot publish it :( We also made another worm movie with her earlier. Maybe we should make an other website for that fetish? I don’t know, it’s not easy to find out what to do.  Would you be guys interested in a website that is dedicated only to the fetish of insects?