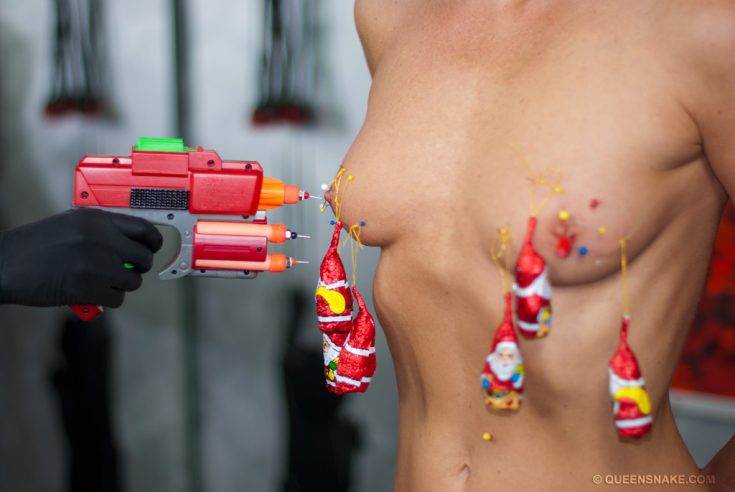 Originally we were going to make a different Christmas video featuring me suffering – I had a crazy idea again :) – but finally we had no time to make it so I wish you a Happy Christmas with this movie which is about Nazryana and the Santas.

As you can see Nazryana’s pain limit is getting higher and higher, this time she learned how painful is when her skin is pierced through by blunt pins.

Before the frightful piercing scene I filled her pussy with some rubbing alcohol and fisted her to make a comfortable place for the Santas who were waiting for their mission into her vagina. Everyone knows that Santas don’t like warm places but they sacrificed themselves for the good of a woman pussy :)

Two big Santas filled with many colored candies went up into her pussy but they were in such a hurry that they broke into small pieces during their march and the shattered Santa pieces covered the floor.
I couldn’t stand such a mess in the room so I made Nazryana eat them up while I motivated her with the cattle prod. It was an efficient cleaning, she worked better than a vacuum cleaner, LOL!

Some of the small Santas also craved for her pussy so I helped them to get in. She got four more small Santas into her pussy and four others had the opportunity to discover her asshole.

The rest of the small Santas were not that lucky, they could only hang around her :) and they became an easy prey for the evil Santa Hunter who was not a good shooter anyway so they stayed unhurt finally but their sexy hostess, Nazryana didn’t.

This story got a bit figurative and funny :). Getting back to the painful reality, her agony was so amusing, especially when I pierced the pins into her skin and when I shot some needles and pins into her nipples and pussy with some modded toy nerfguns. The extra fun was when she wasn’t able to hold the chocolate inside her and she had to run to the toilet but she didn’t make it, ROFL. It’s a pity that the cameraman missed it :D
As an added humiliation for being such a whining bitch, I made her to push out the rest of the chocolate mixed with rubbing alcohol, pee and her vaginal fluid onto the floor and she had to taste it and lick it from my sole.

Meanwhile her boyfriend arrived and he could watch his whore’s final agony and humiliation. Anyway it was the first time that an outsider was watching our performance. At the end of the shooting the boyfriend said that the scenes were much more brutal in real life than watching them in a movie. Yep, we know that ;) that is why we prefer to shoot in an intimate environment: just Master (aka cameraman), me and one of my girlfriends.

Next time I take you guys for an exciting journey into the “wormhole” ;)

I wish you very happy Holidays and an extremely kinky New Year!