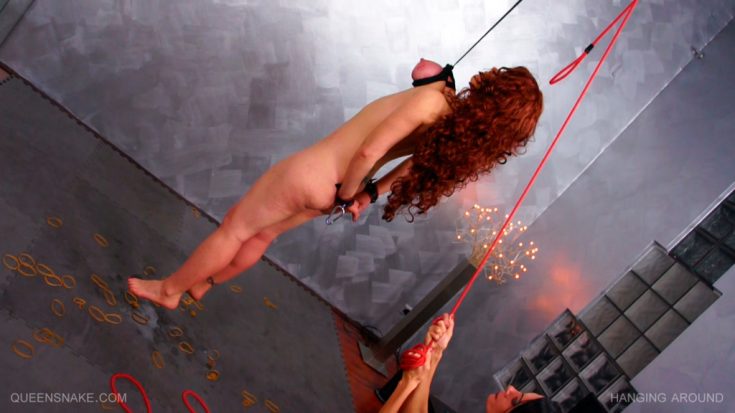 One of my favorite pet girl, Sharon is back. She missed the pain so much since her last (and first) nettle session that she was happy to offer herself for a harder challenge – tit hanging – that she never tried before and she was curious about.

Actually that was our first tit hanging session too, unfortunately my tiny tits are not good for that so Sharon was the first masochistic girl who had the capabilities and the courage for doing it.  I have to admit that I envied her so much :P

Her tits were tied up through a pulley to the ceiling and there was two black cylindrical candle under her feet. In the first part of her torture, she was allowed to hold her balance and weight not just with her tits but with her arms too in the case if she fell down and she missed her footing.

It turned out that she is very good at balancing :) I were just whipping her harder and harder but she didn’t fall down. Finally I had to help her to loose her balance kicking up the candles under her feet, then she had to hold herself with her arms and tits, actually with one tit because the bondage was not taut enough and the rope just slid down. We had to stop video shooting at this point and tied her tits up again.

Without the support under her feet she had to hold herself by her arms and tits and she had to bear the heavy whip lashes on her pussy, belly and tits. I wanted her to lose her control and freak her out so I got some rubber bands and started to shoot her pussy and her very sensitive and hard tits. This time I was satisfied with her reactions, she was squirming and screaming in pain when the rubber band hit her clit and her nipples.

Her tits were getting more and more colorful and she was very close to freak out but she still held herself, no tears, no raving with fury, such a pain slut she is! She was strong but she got so much pain that she really deserved a huge orgasm, the powerful massager vibe worked well on her, she had so intense orgasm that she peed on the floor. Hehe, after all she lost her control finally. She felt very very ashamed and humiliated because of the unexpected pee. She has never had such orgasm experience before, she never peed public especially not before the camera and during orgasm, LOL.

At the beginning of her suspension we had to stop the shooting because she almost fainted but she was strong so after a little rest she wanted to try it again :) This time she was able to hang around for a longer time, she even got some whipping while she was levitating in the air :)

After the shooting, she told me that she didn’t feel much pain during her tit suspension, she just had heavy breathing because of her stretched breasts and the whole suspension was a very weird and exciting feeling for her. She enjoyed it so much that she wants more tit hangings. That is my girl! I love her. I hope you liked her too.

About the after effects, the marks on her tits were like a temporary tattoo and her tits were very sensitive for about one week. The colorful spots remained on her tits for about 3 weeks (after 6 weeks she still has some visible rope marks and bruises).

10 Replies to “Hanging Around”