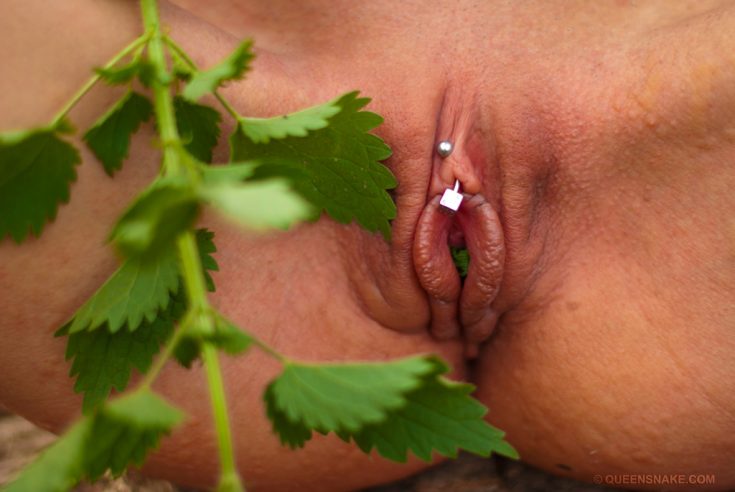 Maybe it sounds crazy but during my self-tortures I am falling into a kind of pain ecstasy, spiritually I am in an other dimension of my consciousness where I am able to get full control above my physical body transforming the pain to pleasure and this way getting a full body and mind orgasm. So it is easy to become an pain addict ;)

There are many kind of pain but my personal favorite is definitely the stinging and burning pain caused by nettles. So I think it’s nothing better than rubbing the most sensitive areas of my body with fresh stinging nettles.

The bright warm colors of the autumn forest gave me an extra delight and inspired me to become a vivid part of it embracing those spiny green plants so to say the wild nature itself.

As a warm up I rubbed my ass and pussy with previously gathered and cut nettles. It really warmed me up :), my asshole and my pussy burned like hell, got deep red and swollen. After a while I felt that my pussy was throbbing and getting wet.

It wasn’t enough, I wanted something more painful… I looked around and found a spot of fresh living stinging nettles right there. They looked rather frightening, I have never seen nettles with so many spines on their stems and leaves. I didn’t cut them down but I sit them on and “fucked” them :) literally using the spiny plants as a dildo pushing them up in my pussy as deep as I could. That was the most intense pain that I experienced with stinging nettles ever. Now my pussy was so swollen that I couldn’t close my legs when I started to walk.

There was a high seat very near, on the top of the small hill and I decided to climb it up to have fun with the rest of the nettle bunch.

Breaking the traditions this time I stuffed my asshole instead of my pussy with stinging nettles. It was new for me and a bit different but enjoyed it.

After using up all of the nettle resources and having some of them in my asshole, we drove home. Master was so excited about the nettles in my anus that he suddenly stopped at the side of the road, pushed me in the forest and ordered me to do an enema with a small bottle of mineral water. It was so humiliating for me but I wanted to pleasure him so I obeyed.  Of course he made a video shoot about it although I thought then that this shot would be made only for him not for public. I was wrong, it was the part of my humiliation that he published my first outdoor enema action mixed with nettles.

As an after effect of this very intense nettle session my pussy and mainly my tormented clit became so fucking sensitive that it boosted my orgasms for about a week ;) Everybody should experience the effects of those wonderful plants on their genitals!