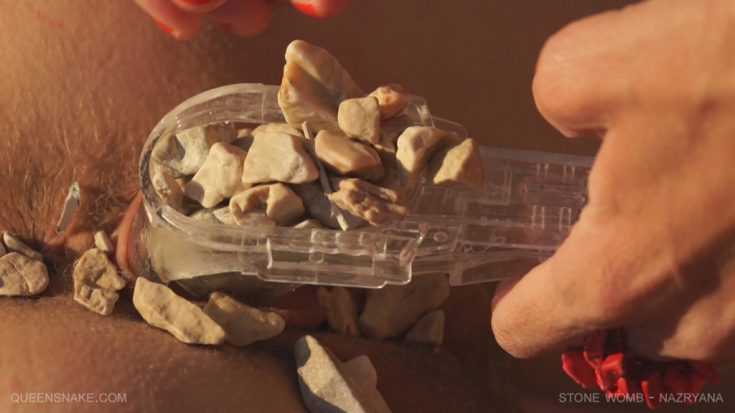 Cunt-stuffing is one of my favorite games and if I have the opportunity to stuff other girls’ pussy than mine it’s even better. Though, there are not too many girls around me who let me do that :P  Nazryana did not have other choice on our holiday trip, she sold her body and soul to the devil – aka us LOL – for a week.

Only walking barefoot on those stones is extremely painful, even our boots are torn during walking on them. There are some parts of the island that makes me feel I am on an other planet, there is no green anywhere, you can see nothing else than the ocean of harsh and rough white stones and the turquoise sea.

We took Nazryana to that beautiful and wild beach where we shot the “Stone Womb” movie last year. Although I told her about my good experiences with stones and she watched the movie, she was afraid of having them inside her cunt and wasn’t happy at all about doing that, but her fear and whimper made me be more sadistic with her :P

Last year after Stone Womb scene we played an exciting game with Master – we threw the stones on each other’s genitals – and it was a big turn-on for both of us. Now I wanted to do the same with Nazryana. So besides filling her vagina with stones, I threw them on her pussy and tried to hit her clit. After watching back the movie, I think I was way too gentle with her so she didn’t get the pain that she would have deserved for being such a whining bitch. But at least she learned how it feels to have stones inside and give birth to them with my help, twice, actually :P

Originally we were going to stuff each other’s pussy but finally the bad weather shattered our plans – we had to stop too many times during the first part, the sun went down and there wasn’t enough light to shoot the role changing second part. What a pity, I would have enjoyed so much to feel the stones in my pussy again. Maybe next time ;)