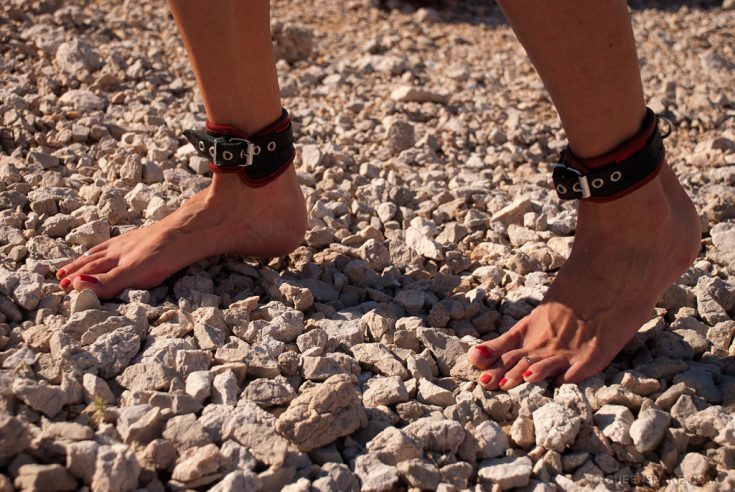 When Master mentioned that he wants me to walk and run barefoot on the sharp stones, I was just laughing at him and said that “Never, it’s completely impossible, I am not able to do it, I can’t do one step barefoot on those horrible rocks! Even the soles of my boots got torn by the sharp stones!” In my case the phrase “Never say never” was very true :)

I ran on the stones and even climbed the sharp rocks like a mountain goat, LOL. The only thing I needed was a little electro stimulation by the powerful cattle prod and some harsh whip lashes executed by the evil slave-driver, Nazryana. It was amazing to discover that how easily I could bear the pain in my soles if I got some other kind of pain stimulation – cattle prod and whipping. Master himself was also astonished, he did not expect me being able to run so fast that Nazryana – who wore boots – hardly could catch me up.

The conception of the movie came from a real historical story: there was a detention camp during the Second World War :( exactly where we shot the movie. So I could really

imagine myself a bit in that horrible past.

“Hard labour” – working as a slave in a stone mine – was the part of the story. So after training my foot and soles, I had to build up a rock pyramid while my severe task-master motivated me to work harder striking heavy cat’o nine lashes on my body. As she stroke me harder and harder there was a point when I was completely freaked out – you obviously spotted it in the movie – and I got so angry with her that I threw the rock away like a fury, actually I had to moderate myself not to fight back and attack Nazryana.

When the pyramid was built up, I was tied up to it kneeing on the sharp stones and my tits and belly got more harsh whip lashes. In the end Nazryana managed to achieve that I was totally broken and I could not hold back my tears.

After watching back the movie I am not sure that the sharpness of the stones came over, being there and feeling the cutting pain in my soles is completely different and obviously better experience than watching the video about it. But I do love this movie and it is one of my favorite :)

A few words about the after effects. I was very surprised when I realized the bruises on my calves, soles and thighs caused by the cattle prod, I have never had bruises before after using cattle prod, it seems that Nazryana made a good job :) The bruises remained for about 3 weeks! The marks of the cat’o nine was also visible for about 2 weeks.