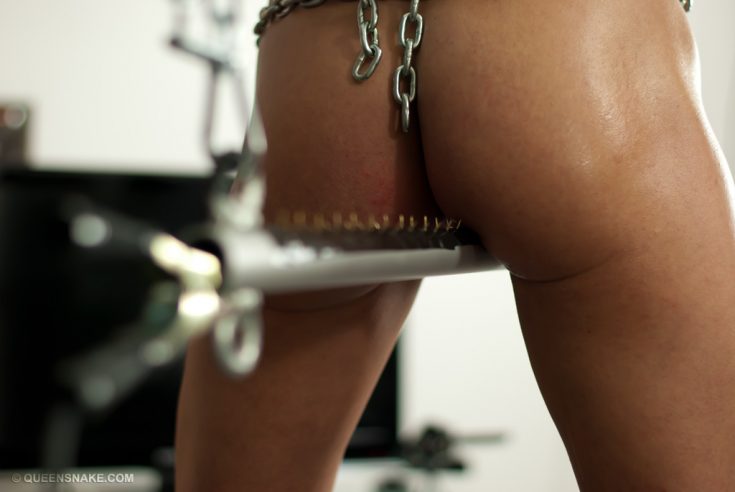 My master sometimes becomes an evil inventor who is testing his new device on his experimental  pet aka me :)  This time he built a cruel and amazing tormenting device mixing the Tackrider idea with some electricity.

The most important part of his equipment was a hanging long metal bar fully covered with thumbtacks and attached to the violet wand.

I was placed above this scary thing applying a spreader bar between my ankles keeping my legs wide spread and preventing me to walk. I had to stand on my tiptoes to avoid the stab of the electric thumbtacks while my hands were tied up behind my back and my hair was tied up to the ceiling hook to keep me in balance.

That was a tricky situation, I hardly could move, I felt myself like a poor creature being caught in a trap :) But my suffering hasn’t been started yet.

Although it wasn’t easy to keep myself in balance and on tiptoes for too long, my master decided to make my situation even harder. He put some self-adhesive pads on my soles and insteps attaching them to his Folsom PSG-MAX device and started to play with the buttons.

I tried to avoid the pain in my pussy and to keep myself up above the stinging electric bar but when I experienced that annoying and hardly tolerable pain in my feet I rather chose to sit on the electric bar instead of being tormented on my feet. In the end I realized that I let the thumbtacks being pushed deeply into my groin. I was so knocked out of the pain that I already didn’t care about anything.

And he just enjoyed his new invention and my squirming and my gagged screams.