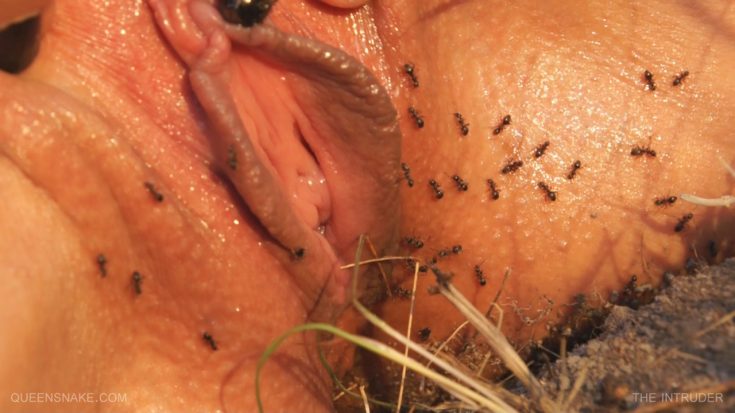 I can’t say that I loved it, I would rather say that I hated it and would never do it again but at the same time I am aroused thinking of being forced to bear those hated bites again.

Their home was in the grasslands under the ground, we hardly can perceive them, actually we almost gave up again although I was totally prepared for the experience and I definitely wanted to try it.

The first mound that my master found was in the middle of steppe. He stirred it up to make them angry, then I just pulled up my skirt and sat on the ruins of their home.

My bare asshole was the closest target for them so it got some very painful bites first, uh they were very intense, short and annoying pain shocks, a bit similar to the pain caused by electro shock. It wasn’t enjoyable at all at least for me :). My master loved to watch my suffering so I tried to tolerate the pain as long as I could to give him more and more pleasure.

Although I hated the ant bites, we kept on searching other ants in the wood. We found some black small ones in the sand and some huge carpenter ants on a dry-rotten tree trunk but they were not interested in my pussy, lucky me! :P

It was sunset and we headed back home sadly because we found only one small anthill and way too few angry ants. But on our way back we ran into a bigger mound and my master wanted me to make an other try with some agave syrup on my pussy.

This time I realized that the bites were not so horrible and I started to kind of enjoy it. First they were just crawling on and in my pussy and drank the sweet syrup but after a while they revenged the intruder and bit me more and more times. It was painful but not so annoying than at the first mound, maybe I was getting used to it.

When we got home, I had a shower and I was very surprised, there weren’t any redness or after-effects on my pussy, as if nothing had happened :) Maybe I will get to like the ants in the end ;)

Please tell me about your experiences about ant bites. How painful were they for you or for your slave? What kind of ants have you already tried?

81 Replies to “The Intruder”