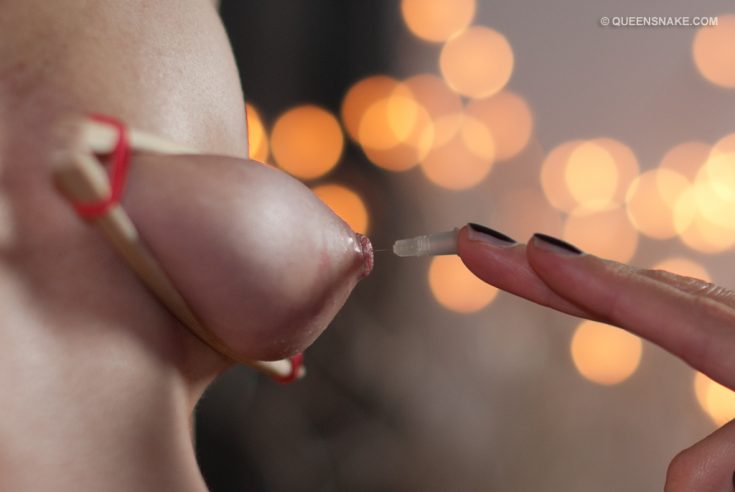 Last night we made a new movie with my girlfriend, Nazryana. After the shoot – I will tell you about very soon ;) –  we caught Nazry and I pierced a needle in the middle of her nipple.

I have to tell you that Nazryana has been dread of needles, pins and staples, she has a real needle phobia and she has resisted any kind of piercing play for very very long time. She is a real scaredy cat, hehe but finally she always enjoys those very scary things.

It was so exciting and sexy to see her crying before I pushed the needle in, she was writhing in her fear and she screamed like a victim in a horror film :) but it wasn’t so painful since I hardly pushed the needle in. I am sure that her fear was much bigger than her pain. I could read her eyes that she couldn’t believe that it was not so painful as she expected :). When I asked her about her feelings, she was unsure and finally admitted that it was not so bad but the needles never won’t be her “friends”. Or course I don’t give up, I want to convince her to try more needles, maybe staple gun next time.

I remember that I used to be very afraid of needles and every object that can pierce, it took years to do it for myself. My first needles actually were pins that you could see in “First Needles” movie and it was a result of a lost bet. When we started to publish and sell BDSM movies on clips4sale.com, we made a bet with my master. I said that people won’t like our movies and we will never sell that many vids to get 1000$, he said that people will love our vids and we will reach that very soon. I promised that if I lose the bet I pierce my labias with pins. Ehh, it was a thoughtless promise. Actually it took less than a month to lose so I had no choice than to sacrifice my poor pussy :).
Thanks to that lost bet, now I am able to control my fear of needles.

What would you pierce into Nazryana and where exactly? :D