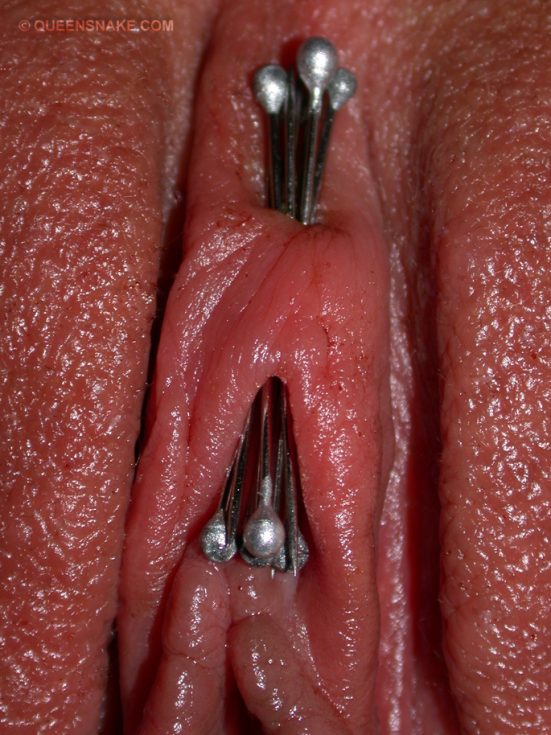 It wasn’t an ordinary piercing process, he made the hole using a bunch of pins. I will never forget that pain, it was so intense.

He is a perfectionist, so he exactly planned where to pierce the first pin. I didn’t know yet the differences between medical needles and pins. The medical needles were way more scary for me at that time although I hadn’t even tried any of them.

As the first pin slowly started to get through the hood, I felt the pain never would cease and when it was over, my master coldly said that the pin wasn’t pierced through the exact place he planned so he pulled it off and tried it again. I was so angry at him but I saw in his eyes that I had no choice.

I was prepared for the pain again. This time he was satisfied with the position of the pin. Before piercing through the second pin, he stretched the hole using cotton buds. After an hour stretching he started to pierce through the second pin very slowly and precisely next to the first pin, it was a horrible and an almost unbearable pain, I got sweat, half-unconscious and I wasn’t able to hold my tears back.

The third pin was as painful as the first one and now there were 3 pins in one hole. The more pins were in the hole the less pain was felt. Finally there were 8 pins in the hood and I was ordered to sleep wearing them all night. In the morning he pulled the pins out one by one and the hole was already stretched enough to insert the piercing. I was grateful to him and I felt I was his. During our later piercing plays he always used pins. After that it was surprising for me when I got my first medical needles into my pussy and the pain was half as intense.

I learned that the pins are blunt and they pierce through the skin much more slowly therefore they cause intense pain. But there are advantages of using medical needles: they are sterile and you can rule the level of pain by the speed of the piercing process.

Which do you prefer: playing piercing with pins or med needles?