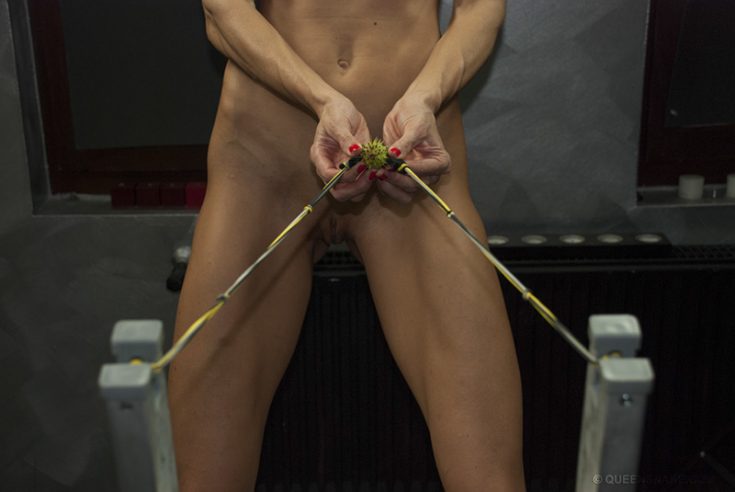 Master built us a weird – a bit catapult-like – shooting device that was actually a slingshot (rubber bands and a piece of leather) attached to a mount (ladder).

Before starting the game, we had to learn how to use the shooter device and mainly we needed some target practicing. I must admit that the aiming wasn’t easy at all – unfortunately we girls never played shooting games in our childhood as the boys usually did – and we were exceptionally clumsy in the beginning but we had some really nice hits finally.

Since the ammo was rather heavy, big, hard and even prickly, the pain was shocking intense for about 20-30 secs after the hit and felt like a horse kick. But what else to expect from horse chestnuts lol.

Of course I couldn’t stand not to embrace the nature itself so I filled my pussy with the prickly balls in the end. Tanita escaped from being stuffed this time, since she just got her period during the shooting and unfortunately we cannot show any “red body fluid” in the movies.

We had beautiful marks after that session and I had unusual spiral patterns on my left thigh, it was like a nice tattoo lol, although it was not permanent – it disappeared completely in two weeks.