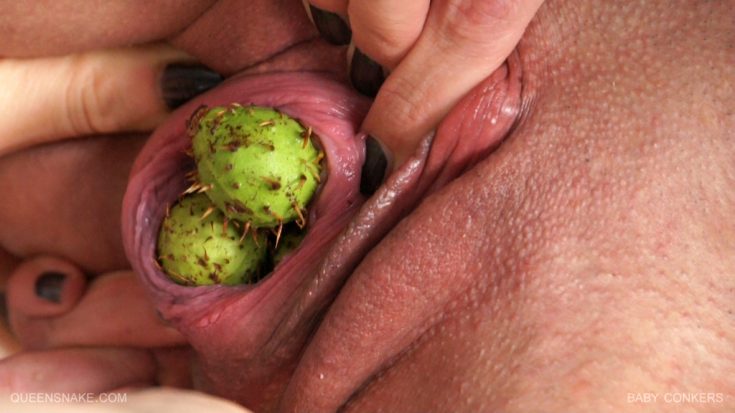 I’ve neglected my blog a bit for the pleasures of the summer but I’ve been doing so many exciting things recently that I could tell about them for weeks.

The idea of “Baby Conkers” session was born in late spring when we were walking home one day with my master and passing by some beautiful horse-chestnut trees.

Their small prickly fruits were much more ideal for our sm games than the bigger ones in autumn and I have already imagined a scene where we would play a brand-new exciting sport: who can throw more conkers into the hole :)

And the game began… Nazryana was the first target, in the nature. Her sensitive body parts has never met those thorny balls before so first I was just rolling some conkers on her body and especially on her tits and pussy.

Then a group of tourists popped up out of nowhere on the hill above us :) and we had to interrupt our game. We continued the scene indoor, her legs were spread apart and tied up and her vagina was opened by a plexi cylinder exposing the cervix and making it a perfect target for the thrower.

Her defenseless pussy offered itself for a good whipping, I couldn’t miss out on this great opportunity ;) When the target was red enough and well visible, the most exciting part of the game has started: I tried to throw as many thorny balls into her vagina as I could but sometimes I missed the hole and her clit and asshole also got some pain.

The roles changed now and I found myself tied up in the same position as Naz was. I couldn’t wait to to know how it feels when my vagina is being used as a target hole.  First I got some warming-up pussy whipping and then she started to throw the conkers in. Hehe, that was a very weird feeling:  frightening, exciting and painful at the same time. When she hit my cervix was the most painful but that was a kind of enjoyable pain.

But after that my pussy and especially my clit was cruelly tormented by her and I was just screaming and squirming in pain when the sharp thorns pierced into my flesh.

In the end we gave birth our thorny babies in the bath. The results of the game: 9 conkers in her hole and 10 in mine, so Nazryana won by 10-9 :)

It was interesting to see anyway that how stronger were my vaginal muscles compared to her when we pushed the conkers out. Probably it is a beneficial side effect of my hard workouts in the gym :D