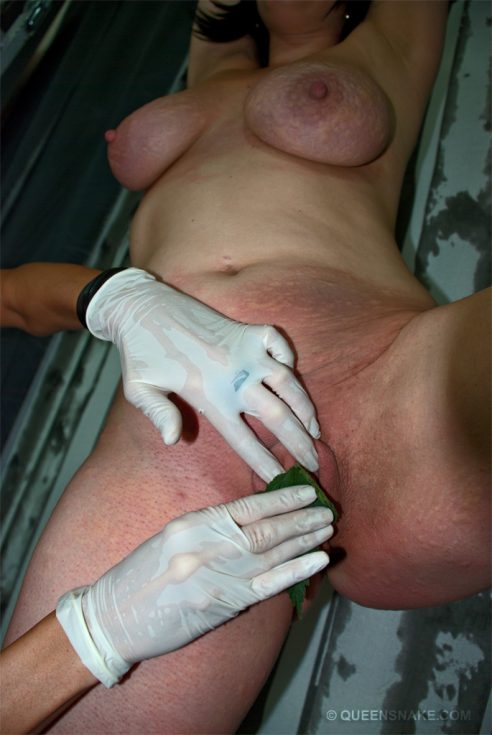 Needless to say that she has never met such a big amount of nettles before. When she saw the tons of stinging bunches, she naively thought that most of them was prepared for me and only a few would be used on her – well, she was wrong :P.

As her first nettle experience I didn’t want to start with too hard torture but finally she got it :). It was unbelievable how she could tolerate the pain, actually I expected crying and screaming but I got almost nothing when I was whipping her with the nettle bundles. I had to get more cruel.

Since she is a very flexible girl, I tied one of her legs up so her pussy opened up to me and the nettles of course :). I rubbed her nipples, clit and inner labias harder and harder using single stinging nettle leaves, that was the point when she first screamed from the pain. For she took the pain so easily I stuffed her pussy with some stinging leaves although I did not plan that. She said after the session that she didn’t realize that the leaves were inside her because the whole of her pussy was in such a pain and fire that she wasn’t able to differentiate what exactly happened to her.

After my master finished the recording I asked Sharon about her feelings. She said that the nettle whipping part wasn’t as hard as she expected but the single leaves brought very hard pain on her nipples and pussy. After all she enjoyed the whole session, especially the orgasm reward.

Since she is a switch girl my master asked her to push a needle into the middle of my nipple. Although she has never done this before she did it without any hesitation, exactly as slowly and cruelly as my master ordered to her. So next time she can give me back the pain I caused her with nettles – or more… :)

I must warn you :) that this is the first movie that shows you how tall I am, Sharon is an average height girl but I was like an Alien next to her :D, especially in my high heels. It was weird that I had to bend to whip her. If you like that kind of contrast you’ll love this movie ;).